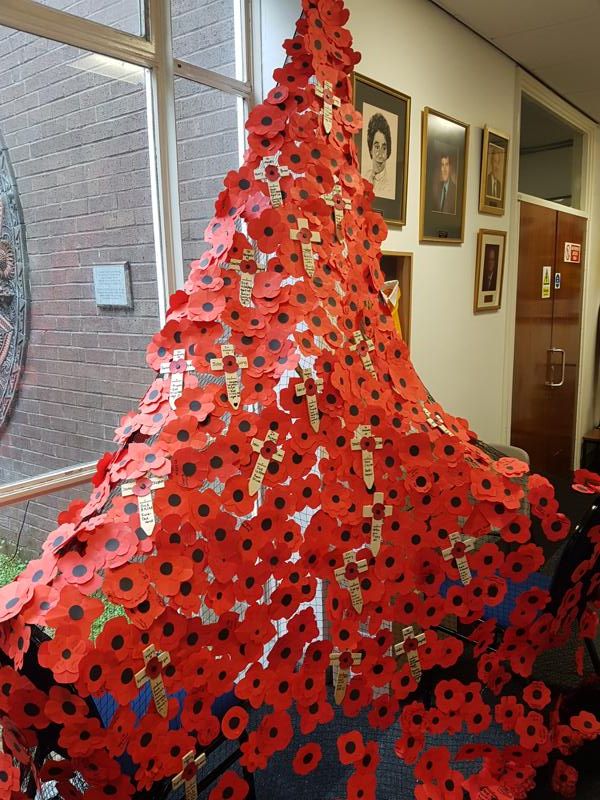 History Pupils at Cefn Saeson have been making origami poppies to commemorate the men who lived, fought and died for our freedom. The display outside the Main Office is based on a 2014 art installation which saw the Tower of London’s moat filled with over 888,246 ceramic poppies, each representing a British or Colonial fatality in the First World War.

During the First World War much of the conflict took place in Western Europe. Countryside that had once been beautiful was devastated by bombs and lengthy battles. The landscape turned from green fields to mud, bleak and barren land where nothing would grow. Bright red poppies however somehow survived and thrived in the chaos and destruction around them. They grew in their thousands, turning the muddy landscape into a sea of red.

Remembrance 100 years ago reflected the harsh reality that almost every family and community in Britain had been directly and very personally affected by the First World War. Remembrance in Britain today reflects many of the changes brought about 100 years ago. It also connects those who have died and been affected by the many confits such as those in Iraq and Afghanistan. Remembrance is something that touches people of all ages and backgrounds, faiths and political opinions.

On Friday, November 9th, staff and pupils will be observing a minute silence to remember the men and women who lived, fought and died in order to give us our freedom.
Lisa Williams, Head of History, Cefn Saeson.